A Child's World For Learning.

How Do Helicopter Parents Interfere With a Child’s Education?

Parenting is a lifelong endeavor that ebbs and flows through different stages and seasons of a child’s life. Parenting has been described as “my heart living outside my body.” And, there is no doubt that parents want the best for their children — to protect them and see them thrive. But, when does the involvement in your child’s life become harmful?

At Community Education Research Group, our early education programs serve infants, toddlers, and preschoolers to help guide and set them up for success in public education. In today’s post, we will explore the topic of helicopter parenting and how perhaps maybe a little too much attention can be disadvantageous for their growth.

As parents and caregivers, seeing our children succeed is of great importance, but sometimes, that becomes blurred in their life experiences — they will eventually experience heartbreak, hurt, and loss — you can’t protect them from life!

This is where the term for a “helicopter parent” was incepted — it is when parents are overly focused on their children and tend to take on too much responsibility for their child’s failures and successes. It is overparenting at its finest combined with an abundance of control, protection, and perfection. Just like a helicopter hovers, so does the parent!

A helicopter parent is one who injects themselves into their child’s life. An archetypal example comes from the TV show The Goldbergs. Beverly Goldberg is the mother to three kids and they endearingly refer to her as the “smother.” It is not uncommon for her to insert herself into her children’s lives by calling up the principal and arguing grades or sabotaging their relationships as a result of her disapproval. She is a quintessential helicopter parent. 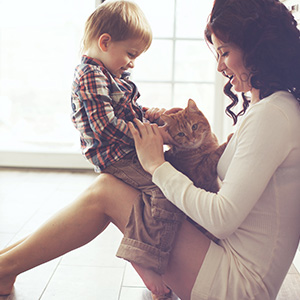 Parents do not wake up and journal during their morning quiet time, “today, I’d like to become a helicopter parent,” so how do these traits develop? Becoming a helicopter parent can manifest through a series of feelings, including:

Helicopter parenting is a far-reaching topic, that is abundantly diverse, so we’ll split it into two posts — stay tuned for the second part!

For an infant, preschool, or toddler program that nurtures and helps develop important life skills, connect with us today!